I think Central New York needs one of these maybe more than it needs Forty Below, Biz Buzz or other such gatherings!

FAILFaire features projects using mobiles and ICTs in international development that have, to put it simply, been a #FAIL. Busted, kaputt. Tongue firmly in cheek, we take a close look at what didn’t work and why the projects failed amidst the ICT4D hype we all are subjected to (and sometimes contributors to). We believe that only if we understand what DOESN’T WORK in this field and stop pushing our failures under the rug, can we collectively learn and get better, more effective, and have greater impact as we go forward.

See more at this NYT article about the most recent FailFest.

Instead of technology failures, FailFaire CNY could be an honest, open hashing-out of failed local initiatives and redevelopment schemes. (I suppose in order to avoid hurt feelings, there would have to be a moratorium on discussing any projects that failed less than ten years ago.) Syracuse B4 could be our keynote speaker!

Seriously, I’m not just trying to be snarky. Why should these discussions just be kept on the blogs?

This weekend, we’re now hearing (the truth) that BP’s latest effort to stop the Gulf oil spill has been mostly a failure. President Obama has been down to visit and to claim that the Gulf Coast “is not alone,” but since our captains of industry and elected officials seem to be powerless to actually stop the gushing oil, I’m afraid that it may signal that the opposite will happen. It’s sad but true: after a certain point, people protect themselves from unmitigatable disaster by ceasing to deal with an area where the disaster has occurred. It gets shunted off to a dark spare corner of their mental world map as a place they don’t choose to ever think about again, like sub-Saharan Africa, Haiti, the countryside surrounding Chernobyl, and (to some extent) New Orleans.

When economic disaster happened to the Rust Belt (in slow motion), the same process took place. Gradually, our region and other neighboring Rust Belt areas and cities, such as Detroit and Buffalo, fell off America’s mental map. The locus of the American imagination is mostly centered around the big coastal metro strips and the South and West. Where New York used to be a big-cheese state culturally and politically, it’s mainly important today to the American story only because of its large and regionally lopsided population. Cities like Syracuse and Rochester have been forgotten, just like the Gulf Coast will be once it’s covered in oil (even though life there will continue, and fish may even continue to get caught).

This means that, over time, our collective knowledge of the “known world” gets smaller – by our own choice. It seems strange that this could happen in a world where every corner has now been explored and is part of a global economy. But as the years go by, these mental blank spots on the map get papered over with generalizations and assumptions instead of actual knowledge of the area. Our modern, progressive minds can only take so much uncertainty, after all. Given a choice between uncertain fears and willful ignorance, ignorance usually wins out.

There’s something about a surveillance camera that makes everyone look like a criminal. Take a look at this cam shot of Times Square, would-be victim of last weekend’s failed terrorist attack: 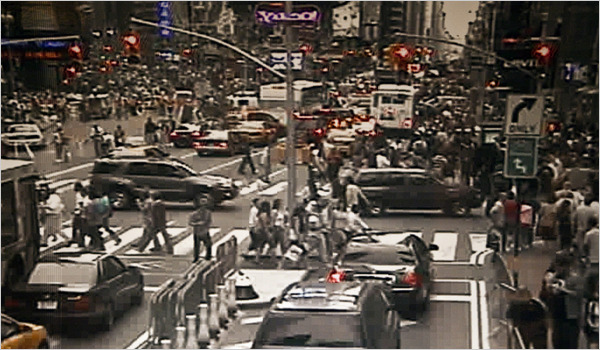 It makes me wonder if turning any city into a seething mass of amusement-seeking humanity is ever really a good idea.

In my usual roundabout way, while I was researching Chernobyl, I came across this Wikipedia article on the ecological theory of source and sink. A “source” is a habitat where a species does well, grows in population, and excess population disperses to a “sink,” often a less ideal habitat which paradoxically may become more populated than the “source” area. The article struck me as having some relevance to the familiar debates about 1) Upstate’s depopulation and 2) why things don’t ever really change here. My take is that Upstate New York has been, and may still be, a “source” in a source-and-sink American population dynamic, probably due to its intimate physical and political connection with New York City’s wealth engine.

This observation caught my eye:

Upstate New York is a wonderful place to live… if you already occupy the best “territories” remaining: jobs in higher education, health care industry, stable industrial/research operations, state and city government (of course). Is it possible that our region has reached an equilibrium of sorts, at least under the way things have worked economically for the last 30-40 years? If the fundamentals of the larger system of which we are part do not change, are things likely to get rapidly better or rapidly worse? (I’m guessing not — but then again, the larger system may be about to suffer a prolonged series of shocks and then all bets may really be off.) A lot of talk has been about how Upstate has suffered in recent decades, but not so much talk about how resilient it has been in other ways — or, if you will, stable (or static). Many people have been trying to program in changes and transformations, but what if the cumulative resistance to change runs a lot deeper than party politics or even local attitudes?

More bluntly put, is it possible that the current arrangement is still working better for more people than it’s not working for (in rural areas, in the suburbs and the urban areas)? If not, then why aren’t people quickly fleeing from Upstate New York en masse?

I don’t pretend to know that much about ecology, so this analogy may be off (ecologists, please chime in…) The concept of the ecological trap might also be of interest – with, perhaps, highly artificial desert environments like Las Vegas or parts of the Sun Belt playing the role of “trap”?

You could, of course, run this thought experiment on “city of Syracuse vs. its suburbs,” too, with the suburbs playing the role of the “trap.”

I have a confession to make: I haven’t played a video game since I was a teenager. Really.

I’m old enough to have been impressed by Pong, and I came of age during the Atari era. Nevertheless, my parents decided it would be forward-thinking and responsible of them to buy me and my sister… an Odyssey console. (But Mom! Everyone has Atari!) It had a real keyboard, not just a joystick, and even some cartridges that purported to teach you about computers. Deep! It also had a game called K.C. Munchkin that was suspiciously a lot like Pac-Man. This made us happy, along with the jolly little dance that the Shootout! gunslingers did when you shot them (or when you made them shoot themselves).

When you don’t have kids yourself, it’s very easy to stay insulated from video game culture, so I completely missed out on Nintendo, Gameboys, Playstations and Wii’s. Or maybe I’m trying really hard to stay insulated, because “gaming” is now a noun and it has leaked into nearly every aspect of entertainment and life. It would be easy to complain about “video game violence,” but I guess what amazes me is that even real life has become a big game now. I have a Twitter stream that I read every day, and quite a few people seem to like to “play” Foursquare (for lack of a better word), which involves having an application tweet your every whereabout and then proclaim you “mayor” of your location. (One of the guys I follow on Twitter recently tweeted that he was “Mayor of Lowe’s” so I asked him if I could get a discount on carpeting. I didn’t get an answer.) On Facebook, it’s all about Farmville.

Then there are the folks sitting in a room at Hancock piloting automated drones over Afghanistan, probably much like these guys in Nevada, who might as well be playing a video game with real bombs. There are lobbyists in Albany playing games, as always, and using their cheat codes.

Is the trend toward 24-hour playtime ever going to stop, or will grown men (in particular) be deeply concerned with games and gaming for the foreseeable future? Is it a problem, or not?