The Daily News’ politics blog has an informative recap of examples of New York politicians losing it while in Binghamton, including a photo of Rockefeller giving some protesters the finger at Binghamton University.

Steve Balogh, who usually posts at Groovy Green but has his own blog as well, piped up there to note the Doc’s Little Gem Diner fire – which resulted in the diner being closed for the first time in 55 years. They had to bring in a locksmith to create keys for the door, which had never had to be locked because they were always open. Such a relief the place didn’t burn down — just like a couple years ago when Heid’s of Liverpool was hit by a small fire in the wee hours of the morning, but survived.

In the wake of the controversy over the Seneca County sheriff allegedly retaliating (citing “police investigation”) against private citizens who posted about him in an online forum, Sean Kirst brings up issues of free speech and online anonymity.

I use an odd online pseudonym (which is not an acronym for anything, believe it or not) but I guess I only started using it because having a screen name is “the thing to do,” Internet custom since the earliest days of the medium. It’s become a bit of an annoyance to me, quite honestly (my new copy of WordPress that this blog recently was moved to, started using my real name attached to comments I’ve posted here – this has to do with the way WordPress is set up -,and I don’t think it’s worth the effort to fix) and I’ve never been particularly anonymous anyway. On the other hand, carefully chosen screen names can be very helpful for some people, particularly when things like this have been known to happen.

Updated: Here’s SU professor Laurence Thomas on the subject of the Internet and anonymity. (He takes a hard line.)

When I posted on water a few weeks ago, the post joined a sort of round-robin of posts on upstate that involved further thoughts from Simon of Living in Dryden and from Robinia, who comments here on this blog as well. Much of this was posted over at The Albany Project, include these entries: Dealing with the disconnect; Finding a Path for Upstate New York; Will multinational corporations take control of upstate NY’s waters? and Just how bad is upstate New York? It’s REAL bad.

Although not part of this round-robin, Fault Lines‘ post on consolidation would have fit in very nicely to the last conversation I linked to above.

CNY ecoBlog has posted about the EcoVillage at Ithaca. MetaEzra also had something (less complimentary!) about the project recently as well.

There’s also a post at ecoBlog about Cool and Uncool Cities, which touches on upstate New York and Richard Florida, and calls for a balanced approach to development patterns in the region.

Alan of Gen X at 40 has some hard, hard choices to make.

I give you the humble salt potato, Syracuse’s gift to the world. Unlike the rest of Upstate cuisine, there are no great secrets about the salt potato to protect. This post reveals all.

Unlike some other Upstate foods, you don’t need a special sauce or marinade to make salt potatoes. Nor do you need a special plate or blueprint for assembly. Just some melted butter. The butter can come from anywhere.

You don’t need special salt. Just… a lot of salt. The salt can also come from anywhere. It used to come from Syracuse, but we don’t mine salt here any more. So, feel free to use your own salt. It won’t make your salt potatoes any less delicious or any less authentic.

You can use any potato, as long as it’s a small one, and as long as it’s a white potato. Hinerwadel’s is a popular brand, but they didn’t invent them. The salt potato was invented by the working man slaving in the salt mines, not some restaurant owner who was running out of ideas. A few years ago, someone was selling counterfeit Hinerwadel’s in stolen bags. Aside from the parties involved, nobody cared. There was little public outrage. It was a non-story (save for the spectacle of Germans and Italians fighting for control over a delicacy that was probably originated by Irishmen).

So, use any small potato you like — as long as it’s not red. Red salt potatoes are an abomination before God. I have heard rumors of their use. If you are in some other part of the country, like North Carolina for instance, and you are serving red salt potatoes, you need to come back to the Old Country for a little bit and get your mind right.

But you don’t even have to go to Hinerwadel’s clambake in North Syracuse in order to get a “real” salt potato. You know, we don’t have anyone making a crapload of tourist business off these things. No one claiming to be the inventor, no one claiming to be the One and Only. No Nick Tahou’s here. And we don’t have a salt potato festival, or salt potato contests. Just boil them and eat them. Throw your own party. That’s where you’ll find them.

Funny how things change: It was just a few months ago that we were supposed to be envying all those regions of the country that had a “robust economy.” But looking at this map, I see there are some hidden drawbacks to all that prosperity: immense and possibly unaffordable housing costs. Costs which seem to have people upset enough these days to produce a map such as this. But why are people so worried about this now? (Maybe because… I don’t know… a lot of that alleged prosperity we’ve been so envious of may yet prove to be built on bubbles and bad paper? Oh, I’m just being silly now.) 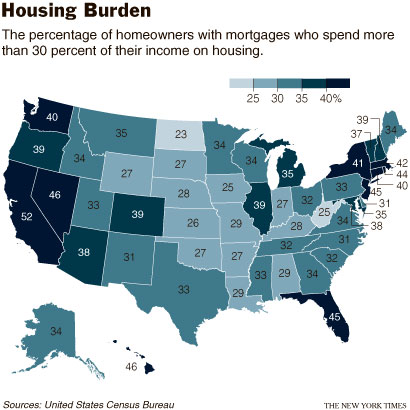 This map looks misleading when it comes to New York, and appears to reflect downstate home prices. But in the Syracuse metro area, only 27 percent of the mortgaged homeowners have housing costs that are more than 30% of their income. Which means, upstate New York as a whole is possibly close to the color of West Virginia on this map. (Except, West Virginia has lower property taxes.) Take that as you will, for better or worse. And pass me sum o’ dat moonshine, Pappy.

And here I thought I was paying attention… wow, how’d this one get by?

New York Attorney General Andrew Cuomo is seeking dismissal of a lawsuit filed against state Assemblywoman Donna A. Lupardo, D-Endwell, and others by an energy company that wants to develop a power line through upstate New York. New York Regional Interconnect filed suit earlier this year against Lupardo as the author of a new state law that prevents energy companies like NYRI from using eminent domain to seize private property. The lawsuit also names state Sen. John Bonacic, R-Mt. Hope, who sponsored the legislation in the state Senate.

I guess this was not unexpected, but it’s still weird to think that legally (under the 11th Amendment) a company has to sue individual legislators rather than the State itself. Here’s another story from the Norwich Evening Sun.

In other news, Clinton and Schumer introduced Senate legislation against FERC, in the name of states’ rights, over the summer. And also last month, railroad magnate Walter Rich died. This leaves people wondering what’s eventually going to become of the New York Susquehanna & Western railroad, and its murky relationship with NYRI (see this story for background). Some of the various anti-NYRI activist groups have been relatively dormant this summer – not a whole lot of press coverage, at any rate – but the Upper Delaware Preservation Coalition and Upstate NY Citizens Alliance (based in the Utica area) are currently active.

It’s been a while since I last wrote an update on the NYRI issue. The reason why I have been so interested in NYRI is not because I live in the affected area (I don’t) but because I am concerned about the whole “national interest electric transmission corridor” thing and what kind of precedent it sets for other resources we have here in New York State, especially our water resources, as I wrote last week.